skip to main | skip to sidebar

This is dedicated to all the strong women out there..and to those that might just had enough of it..

She was on her way to college
Graduated high school tall and proud
One of those that the others had doubts about
Beautiful and proud she carried her self with pride
While her so called friends watched in spite
Jealous that she still maintains her identity
Cultured to the core her smile was reason to live for so many.

My friend - who called me 3 in the morning
Crying she wouldn’t tell me what it was
But needed to talk, came over..
I saw her hands bruised
Her soul still intact but body in much pain
She wouldn’t say much but that she had left home
The tears in her eyes told me something else
She then said her mother beat her and father did too
And they had some dude watch it all that and encourage it too
She had enough and ran away never wanting to go back
No money in her pocket, a tshirt and hoodie on her back
She said she was set never to go back

We talked about life and shit, all night along
Hoping to comfort her but not much helped
Her eyes were talking she did not say much
I finally fell asleep while she was still watching tv
Woke up to find out, she was gone
Left me a note sunmit I cannot be a burden on you no more
I am not sure where I am off too
but I am sorry I am gone
I dint think it was true so I looked around
the house and outside too and she was fo real not there no more she just was gone…

I prayed and hoped she would be okay where ever she would be…Its been a few years now since she disappeared, her friends and family cried for a bit and then no one cared…!

Its been 10 years now and
I bumped into her yesterday
It was hard to tell it was still her today
I thought I would find her in rags and a bunch of kids
Instead she was still walking tall with her chin high
Working at the local deli she made her money
And lived with a roommate who was a druggie
She tried giving me the 20 bucks I gave her years ago
Put me to tears the look in her eyes
Beaten by her parents, rejected by her friends and family
She ran away with nothing on her back and 20 bucks in her hand
Today she sits in front on me with a smile on her face
1 in a million like her make it in this cold blooded place
The rest end up at the homeless shelters or prostitution centers
Abused by their relationships, Aids infected, cocaine addicted,
beaten to the core to the point where the soul speaks no more

and this end’s without any rhymes or sophisticated poetic ending’s cuz this is the story of the average girl who gets used and abused and left at home, unable to pick her self up she is in a state of mind I am unable to define. Millions of women around the world are a victim to abuse from their own families and the rest abused in their relationships weather its marriage or some other shit. But to all you women be careful who you open your hearts and souls to make sure he wont hurt you and if he hurts you twice it serves you right cuz even tough love believes in second changes being abused in a relationship time after time is not a chance you take! This might sound so extreme and all but if a man lay’s a hand on you again and again take a nine and shoot him in the head and before he closes his eyes tell him sunmit said fuck you too I am glad you dead.
Posted by G.N.E. at 8:37 AM 6 comments:

I write, we write
Our feelings on paper

I am like a thought that
just stays in your head

never leave the base,
I just stay in your place

when you try to kick me out, your head hurts
and if I leave you might need some Aleve

and when I am gone the only thing
I will leave behind was the idea that
never look back and stay strong!

dont say we didn't tell you so
here is the message, here it goes

sometimes, its these moments in my eyes
gazing up towards the empty sky
wondering if you're there or if you're shy?
i know you're there, come out and say hi

i look and see there you are
staring back at me
through a window, through a tree
through a mirror, through a breeze
wherever you are
i can feel you breathe
breathing, sitting, living next to me

a part of me wishes to flee
a part wants you miserably
take your pick, for you its free
next to you, im supposed to be
- Sevak -
Posted by Sevak at 4:08 PM 2 comments:

A Warning for Sikhs: The Dera Chief issue continues to Escalate

The Indian Government has failed so far to act upon arresting Dera Chief Ram Rahim for his actions against Sikhs and humanity. Putting aside what he has done against the Sikh community, the Dera Chief is known to be involved in many rape and murder cases, but the Government has yet to arrest him. Instead, when you read the Indian Nationalist publications such as the one below, you will find them using terms to demonize the Sikhs while not stating one piece of falsity by the Dera Chief or the inactions of the Government. Whereas the Dera Chief should be arrested, the Times of India suggests the riots in Mumbai could have been prevented if the Dera Chief had been given more police protection. If this does not illustrate the joint bias against the Sikhs by both the Government of India and its media, I have no clue what will. If the Dera Chief is not arrested and justice delivered, such incidents are bound to occur again and again. The Government itself is planting the seeds for a massive conflict in the coming future.

http://timesofindia.indiatimes.com/India/Sikh_mobs_run_riot_in_Mumbai_/articleshow/3152760.cms
Posted by Sevak at 8:46 AM No comments:

this one was really random because one, it came out of nowhere, two it was in third person ( i almost always write in first person), and third it was in hindi...? i havent spoken that in years....here it is:

This just reminded me. I saw the movie "Kite Runner" the other day. Which by the way, is an AMAZING movie. I recommend everyone watch it. And the character in that movie said something along the same lines. I believe he said.


Something along those lines.
Posted by SaintSoulja at 10:07 AM 1 comment: 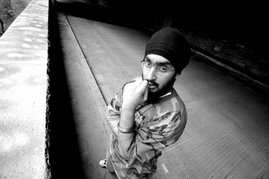